The Mystery of Sapa

Welcome to the second installment of my Travel Blog, the Sacred Pause.

Sapa, a mountainous region in Northwestern Vietnam has been calling to me spiritually for the past 20 years. I came here hoping to discover of piece of the tapestry of who I am, but instead encountered the mystery of a foreign land.  My experience of Sapa has been a combination of contradictions, a stunning landscape of natural beauty set against a backdrop of rural poverty.

On my first full day in Sapa I visited a Hmong village. As soon as I stepped out of the van, four women surrounded me. Three of the women were Black Hmong, so named for their dark clothing. The fourth woman was a Red Dao who wore a red turbin on her head. They immediately started chatting asking me my name and where I was from, just simple conversation. They seemed eager to get to know me. My guide had warned me that the women would want to sell me their hand-woven goods, but I was oblivious in the beginning and was happy to respond to their questions.

Soon we came to a Hmong household and my guide directed me inside. The four women walking with me dropped back as I proceeded towards the house. I noticed a vat of indigo dye on the porch. The guide explained that they grow indigo plants alongside the house. I stepped through the doorway into a very dark interior. A Hmong woman came forward to greet me.

She walked me over to the kitchen area where two women and a young child were huddled around the kitchen fire. I noticed strips of raw bacon hanging from the ceiling smoking over the fire. Smoking meat is a good way to preserve it. To the right of the fire was an old woman seated on the ground. She was twisting what appeared to be strands of brown straw. The Hmong woman proudly introduced me to the elderly woman and said that she was 100 years old. 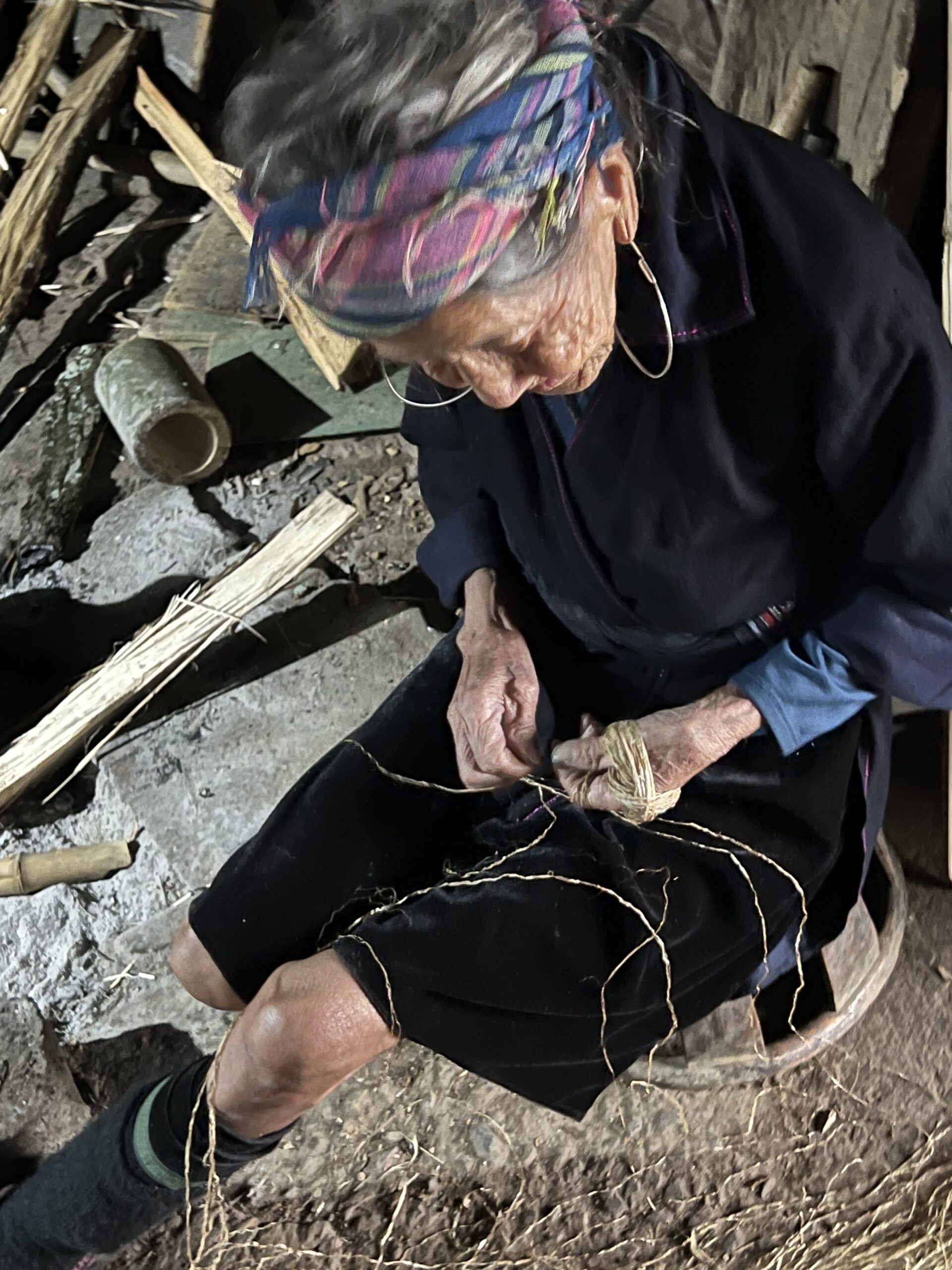 We walked back to a front porch area where hand-dyed pieces of indigo fabric hung on a clothes line. I pointed to a rectangular indigo scarf and the woman asked me for 300,000 dong, which is about 12 dollars. I thought it was high but figured it would help provide food for the family of four and that was fine with me.

When I stepped back out on the street the four women immediately surrounded me again and when they realized that I had bought something, immediately started pressing in on me with small hand-woven purses for sale. I caused quite a small scene when I tried to explain that I had no more cash since I had just spent it on the scarf. I tried to offer them dollar bills, but the Red Dao woman grimaced at a tiny nick on the border of the five-dollar bill and handed it back to me. I was uncomfortable and not sure what to do. They seemed insistent however, and so the guide stepped in and offered them 40,000 dong each or about $1.60. They seemed satisfied with the transaction and left us to continue walking down the street.

I wasn’t upset by the experience; I understand these women need to earn a living to survive. What struck me was the incredible poverty these people cope with. The guide told me Vietnam has 54 ethnic groups. A blog written in 2013 on the World Bank website claimed that ethnic minority groups make up 15 percent of the country’s population but account for 70 percent of the nation’s extreme poor. On a personal level, I definitely felt saddened by what I had seen.

Coming from a privileged background as I do, it was good for me to awaken from some of my romantic images of how I perceive these people. I have to admit, I like their colorful clothing and bought a beautiful hand-embroidered blouse for myself at a shop, but my eyes were opened to a new and different reality of how hard these people’s lives are.

It continued to rain hard while I was in Sapa and the next day we went to see Thac Bac, the silver waterfall. I was soaking wet by the time I climbed what seemed like a thousand steps to reach the landing to view the waterfall. It was magnificent. I felt immense joy feeling the power of the water roaring and pounding down the mountain. There is rhythm in the pouring rain, a constancy that is soothing.

I am leaving Sapa having realized a dream I have had for many years to visit. Although I haven’t uncovered the secret of why I came, I take my leave incredibly impressed by the strength and pride of the ethnic people, and the beauty of their natural surroundings. I am grateful to have had this opportunity and look forward to the next stop on my adventure—the warm beaches of Pho Quoc in the south.