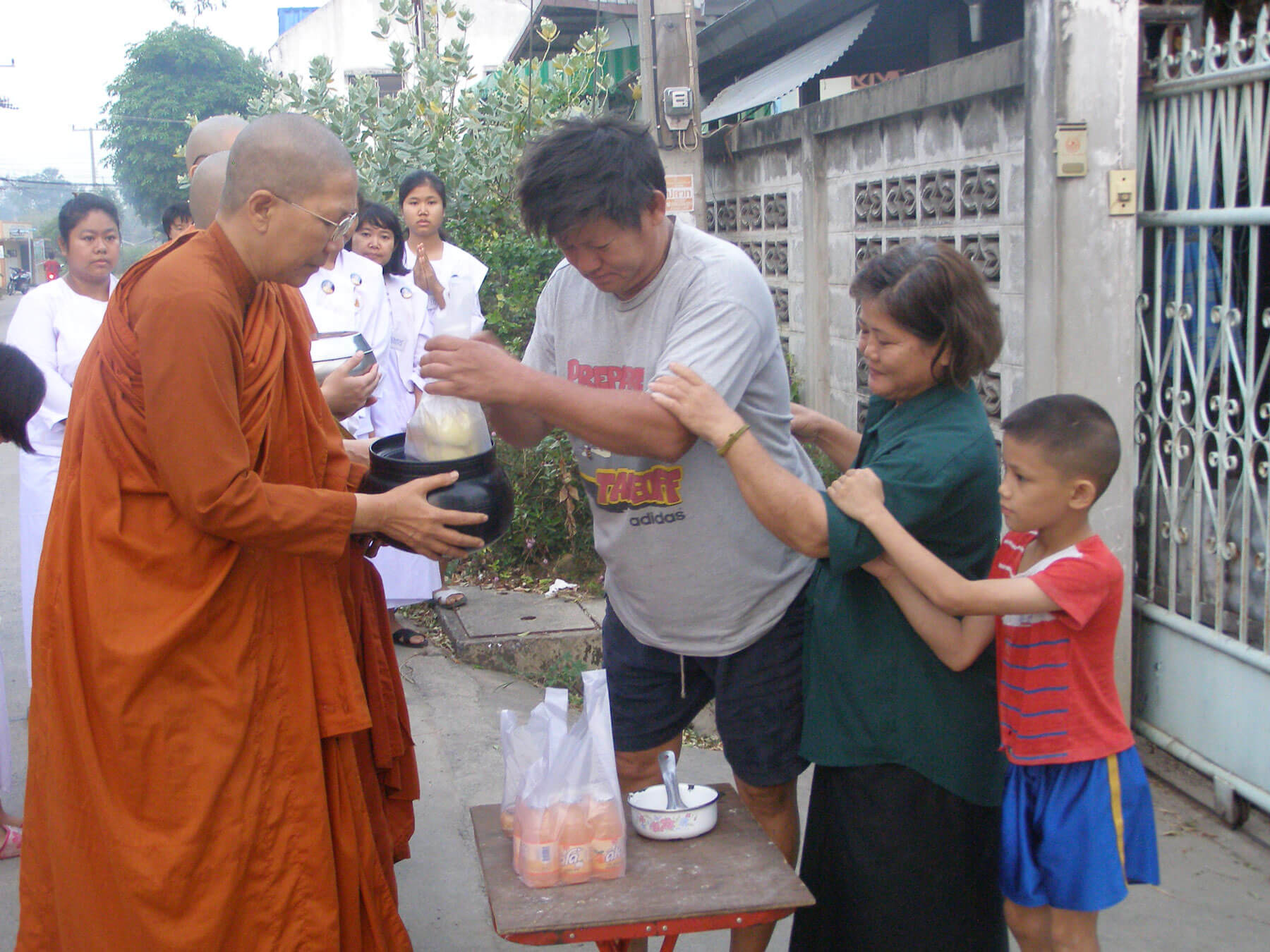 Venerable Dhammananda an on Alms Round. 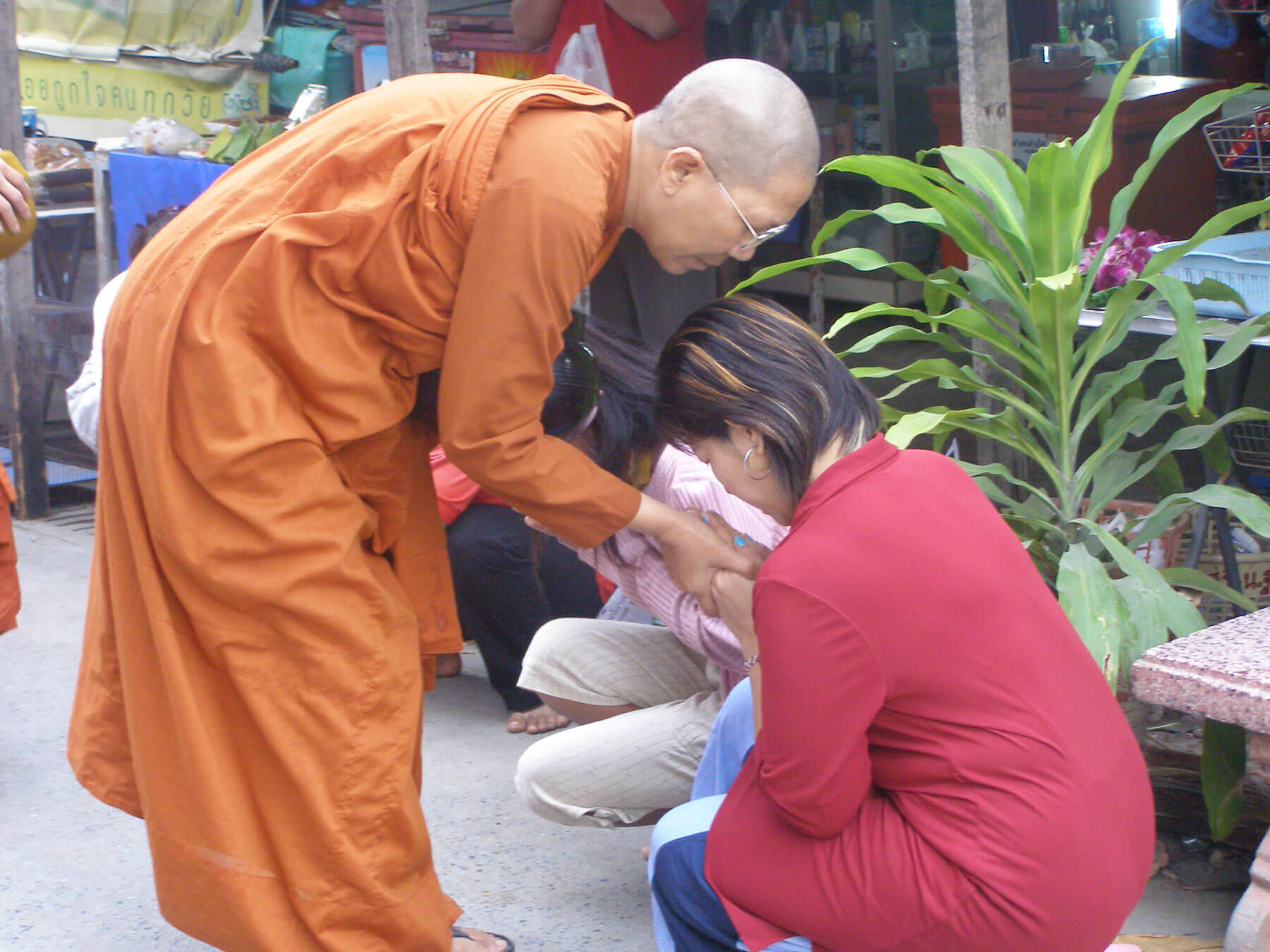 Venerable Dhammananda an on Alms Round.

“It all begins here….in our hearts”

Venerable Dhammananda Bhikkhuni (pronounced dhamma-nanda pee-ku-ni) is the abbess and spiritual leader of Songdhammakalyani Temple, an all female monastery in Nakon Pathom, Thailand located about one hour’s drive west of Bangkok.

When Dhammananda chose to be ordained there were approximately 300,000 monks in Thailand and no ordained women. She had to go to Sri Lanka to be ordained because Thailand doesn’t allow the ordination of women.

Her novice ordination on February 6, 2001 as the first and only openly ordained Theravadin nun in Thailand sparked a strong public controversy. She was attacked in the media and received hate mail. When asked if she was brave, Dhammananda simply commented that she did not consider herself brave at all, but simply had full faith in the Buddha.

She has dedicated her life to restore the Bhikkhuni Sangha, the female lineage of Theravadin nuns in Thailand. Her vision is admirable. In her words, “I have traversed the globe so that my grandchildren will be proud of their grandmother who cleared the path for them to walk proudly as women.”

Roots in the Dhamma

Dhammananda believes that the DNA for the ordained life runs in her family bloodline. Her maternal grandmother, Somcheen, was illiterate, but in her elder years she became a maeji (white-robed nun) and was the leader of women at her temple. Before she died, Somcheen predicted that she would be re-born one year from the date she passed away. On that exact same day one year later, October 6, 1944, her granddaughter, Chatsumarn Kabilsingh Shatsena (Dhammananda’s birth name) was born to her parents Voramai Kabilsingh and Kokiat Shatsena. Dhammananda believes that she carried on the transition her grandmother started.

Dhammananda’s mother, Venerable Voramai (b. 1908-d.2003) was a powerful role model for Dhammananda. On May 2, 1956, tired of waiting for the monks to give her permission to be ordained, Voramai Kabilsingh took her then eleven-year old daughter, Chatsumarn, and her three adopted children to a barbershop where she promptly asked to have her hair shaved.

She then went to Wat (Temple) Bovornnives where she received the eight precepts from her teacher Pra Prommuni, deputy Abbot of the temple. In 1960 Venerable Voramai founded Songdammakalyani Temple, the same Temple where Dhammananda resides today. In 1971 she was ordained as a bhikkhuni in the Mahayana tradition in Taiwan.

Dhammananda’s father Kokiat Shatsena was a member of parliament who spent most of his life living and working with people in southern Thailand. He was a dedicated politician who won three consecutive elections. The military government didn’t like him for speaking out against the government and he was imprisoned several times. Dhammananda claims he was the first feminist she ever knew and that he believed strongly in the revival of the Bhikkhuni lineage in Thailand.

Both of Dhammananda’s parents were passionately committed to a life of service and laid a strong foundation for their daughter instilling the belief that women and girls are equally capable to men and boys. Dhammananda is grateful for her father’s strong sense of encouragement and her mother’s determination to create change. She inherited her sense of social responsibility from her father and her commitment to the monastic lifestyle from her mother.

Dhammananda did not think seriously about being ordained until she was in her mid-fifties. An Associate Professor of Buddhist Studies, she had taught for twenty-seven years at the prestigious Thammasat University before resigning her position in 2000.

At that time she was a wife and mother who had been married for thirty years with three grown sons. She was at the peak of her professional career. “I was an academic, a respected scholar and professor of Buddhist Studies, and a popular media personality.”  Click here to learn more about how Dhammananda made the decision to be ordained.

She is a prolific writer. In her lifetime she has authored more than one hundred books on contemporary issues related to Asian Buddhism. Her most popular books in English are Women in Thai Buddhism, My Sri Lankan Lineage,and Training the Monkey Mind.

She also translated from Tibetan into Thai several books written by his Holiness the Dalai Lama including Freedom in Exile, his autobiography. In 2004 she was honored to receive the Outstanding Buddhist Women Award from the United Nations. In 2005 she was nominated for the Nobel Peace Prize and in 2014 was appointed Pavattini (senior Buddhist teacher). She is the only Pavattini in Thailand.

A scholar and a healer, Dhammananda is deeply committed to training and educating Buddhist women at her temple where she welcomes local people, students from abroad and ordained women from Thailand and foreign countries to come and practice with her.

I was lucky to meet Venerable Dhammananda soon after my family moved to Bangkok in 2005. Attending a conference with a focus on women in developing countries, I heard her speak on a panel called, “Faith, Feminism and the Power of Love.”

The moderator led a discussion that centered on whether being a feminist or having feminist values was in contradiction with having faith or with practicing one’s faith. Eight women from South America, Africa, Iraq, Myanmar, and Thailand participated in the discussion.

Toward the end of the session a tense debate broke out between two woman from different countries who expressed opposing views about how strongly held religious beliefs affect the lives of poor women. The tension in the room was palpable.

That’s when I first heard her speak. Seated at the edge of the semicircle was a tall, slender Thai woman dressed in saffron robes and flip-flops. Her head was a fuzzy crown of black shaven hair, and she wore thin, gold, wire-rimmed glasses. She spoke in a calm, quiet voice, soothing the waves of discontent.

“We cannot solve anything by anger. Anger doesn’t lead us anywhere. It is more difficult to practice compassion and loving-kindness. That is the goal of Buddhism.” I woke up in a powerful flash of recognition as her words resonated deep within me. I knew that I wanted to spend time with her at her temple.

That weekend following the conference I visited her. That was my first visit over sixteen years ago. To this day I still remember the first words she spoke, the prophetic wisdom of my spiritual teacher and healer, Dhammananda Bhikkhuni. You can read all about my relationship with Venerable Dhammananda in my book, Finding Venerable Mother: A Daughter’s Spiritual Quest to Thailand.